Some background: I’ve been contributing to the Folding@Home project since 2009. This project uses computers to simulate protein folding in order to test new ideas, drugs, etc, related to things like alzheimer’s, huntington, diabetes, etc. Essentially users install a program on their computer and that program uses the CPU and GPUs to run simulations.

Since folding takes everything to the limit, CPUs and GPUs run hot. This means two things: fan noise and a hot and dry room. Noise is annoying and the heat is not something I always need. It’s useful for those cold winter months, but becomes a problem when temperatures raise and you live in an old building without AC.

Back in 2016 I had an idea: why not move the computer outdoors?

A year earlier, I had to build this small “shed” in our garden. I live in London and while it’s a nice city, the weather is not that good. Not only it rains a lot, but it’s a cold place in the winter/spring and we were struggling to dry our clothes indoors. In normal conditions we would just replace the regular washing machine with one that did both, but due to an unfriendly landlord, we couldn’t. Since there was no space indoors, I got a dryer and put it in our (small) garden.

I say “shed” because it’s actually a “box”. Image a cube: two of the sides are walls, the floor is made of cement, the top and two sides were built by me. Material used? Wood for the frame and ceiling and everything was covered by PVC plastic usually used for floors. Yes, this is not how you build a shed but it was supposed to be temporary. I picked cheap material.

It was big enough to fit a dryer, kept rain out, and wouldn’t take-off on windy days. Electricity was provided by an extension cord that could be used outdoors (not exposed to rain/sun, to avoid issues).

Since the dryer worked well for a year, I thought I could place a computer in there. It’s a closed space and temperatures would be acceptable in winter. I wasn’t sure about things like humidity or if hardware would last for a long time, but I wanted to test the idea.

I was folding with my desktop, which I also used for gaming, watching movies, and do some work, so I decided to do two things: upgrade my PC and build a computer just for folding. The idea was to use some of the old desktop hardware and buy the rest.

I reused the old case and fans, 8GB of RAM, a spare 120GB Samsung SSD, and both my GPUs (NVIDIA GTX 770 and GTX 980). I had to buy a processor (Intel Core i3), CPU cooler (Cooler Master single tower), motherboard (Gigabyte Z97P-D3), and a power supply (EVGA SuperNova P2 850 W, which was overkill). I’m a Linux noob, so I used Windows 7 as the operating system and Chrome Remote Desktop to control everything.

Since this computer was to be controlled remotely and needed internet, I used an old USB WiFi adapter. It was slow, but I didn’t need it to be super fast.

I didn’t build the best computer I could or spent too much money because I was expecting hardware to start failing after 6 months or 1 year, but I was wrong. After 4 years, the computer is still there and no hardware has failed so far.

If I knew this, I would have picked better hardware. The motherboard, for example, can’t run two GTX 1080 Ti at full speed. Next time I upgrade the GPUs, I’ll also have to buy a new motherboard.

Looking back, it’s clear that I didn’t think about everything and that I made some assumptions that turned out to be wrong.

I was worried about the temperatures in winter, but since the computer is always generating heat in a closed area, temperatures inside the shed rarely go under 10ºC (50ºF). Right now is 1ºC (35ºF) outdoors, but it’s 17ºC (62ºF) inside:

As you can see, these aren’t extreme temperatures. The handful number of times that it actually got cold inside were caused by snow, some problem with Folding@Home servers (no folding = no heat), and… Windows 10 updates. I also don’t see any quick changes in temperatures, even when it’s getting colder: 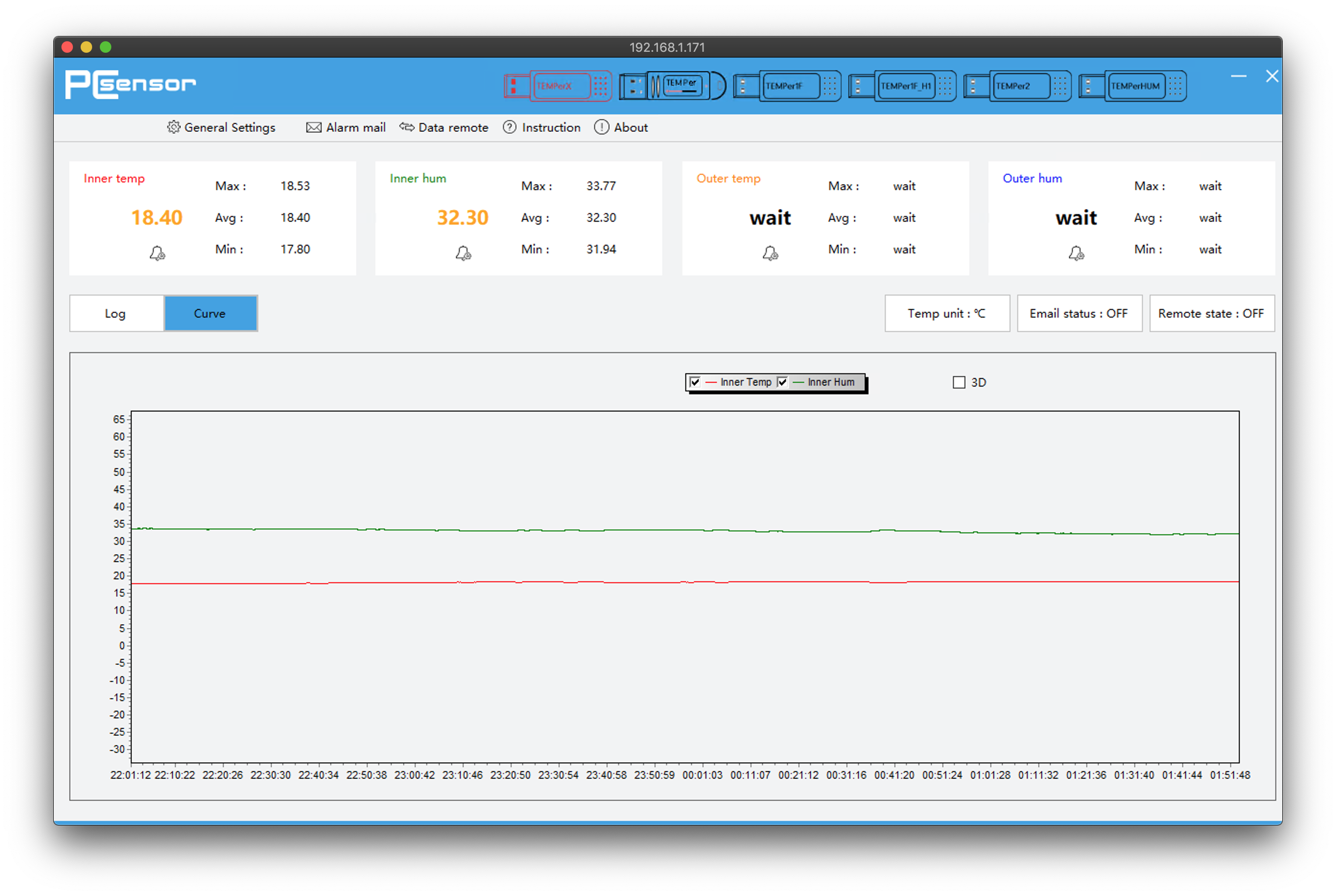 PC Temp, the app for an USB thermometer. More info below.

Hot, sunny days, are more of a problem. I’ve seen temperatures inside around 47ºC (117ºF) between 12h-18h. To manage temperatures, I’ve made two changes:

For the first one, I use MSI Afterburner as it allows me to underclock and set the max temperature. As soon the GPU goes over the limit, it starts throttling. This is a great help and only affects performance in hot weather. Temperatures of both GPUs are between 55-65ºC (131-149ºF) depending on the simulation and outdoor temperatures.

The second fix… don’t laugh about it, but it’s just a USB fan with 2 speeds that blows air out. Since there was space for air to enter the shed, I made a cut on the plastic enough for the fan to fit and added a protection outside so water doesn’t get in. It’s always running, but in winter I use the slower mode and in summer I use the faster one. It’s a dumb and cheap (~15 bucks) fix that helps reducing the heat inside.

With these two changes, temperatures rarely go above 35ºC (95ºF). Still hot, but not hot enough to cause problems.

Since the computer is always running, things are pretty dry inside. You won’t find any mold or wet spots in there.

I had a problem with the case though. Part of the front panel is made of a metal mesh and the area in front of a fan was getting rusty after 2 years. I fixed it by removing the rust and applying a few layers of spray paint.

The rest of the case and all components inside are fine. No signals of corrosion so far.

I clean up the shed (and check the hardware) once or twice a year, usually before the hot weather arrives. After running for a year 24/7, dust builds up inside, specially around the GPU fans (which always run fast as I want to keep temperatures down).

I always find a few spiders, tree leafs, and dust. This is to be expected as this thing is in my backward and wasn’t built to have someone living there. Other than higher temperatures due to dust build up, it doesn’t seem to affect the computer.

The dust inside could probably be reduced by using a positive pressure approach or by using air filters, but I want good air flow inside the case. It’s a trade-off and I’m ok with some dust.

In 2017 I replaced both GPUs. They were working fine at the time, but newer GPUs were twice as fast at the time and I decided to replace them both. One of them is still in use on my desktop, but I’m starting to see some artifacts from time to time. This is probably related to its age (5 years) and the fact that folding is really demanding, not because of the conditions inside the shed. 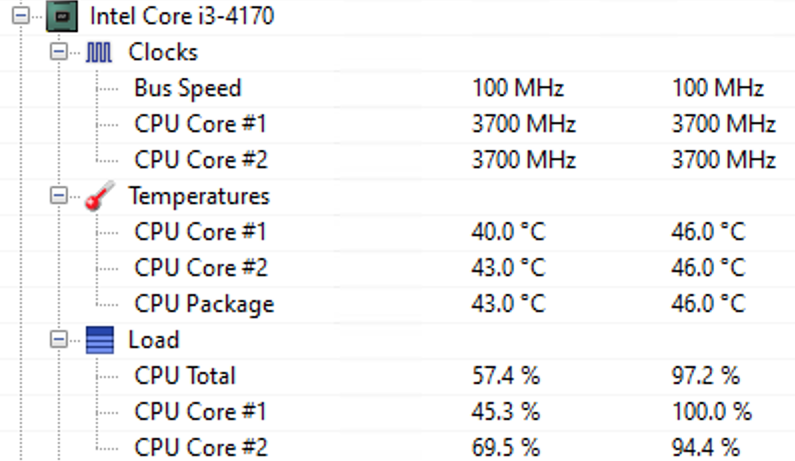 Unrelated to the computer, but I also had to replace the plastic used around the wood frame work as rain water was making its way inside. It wasn’t affecting anything, but I redid it anyway as I wasn’t happy with my original work. 😀

Remember the part where I said it was supposed to be temporary? Well, I still live here and some things changed since then.

I always had WiFi signal issues outdoors and after testing different solutions, I decided to buy a Ubiquity UniFi AP-AC-LR (main access point) and a UniFi AP-AC-Mesh which stays inside the shed and connects to the main access point via WiFi. It then retransmits the signal (so I can use my laptop and phone outdoors) and provides a wired connection to the folding computer.

While a wireless bridge isn’t that fast, this change almost eliminated connection errors and improved latency a lot: 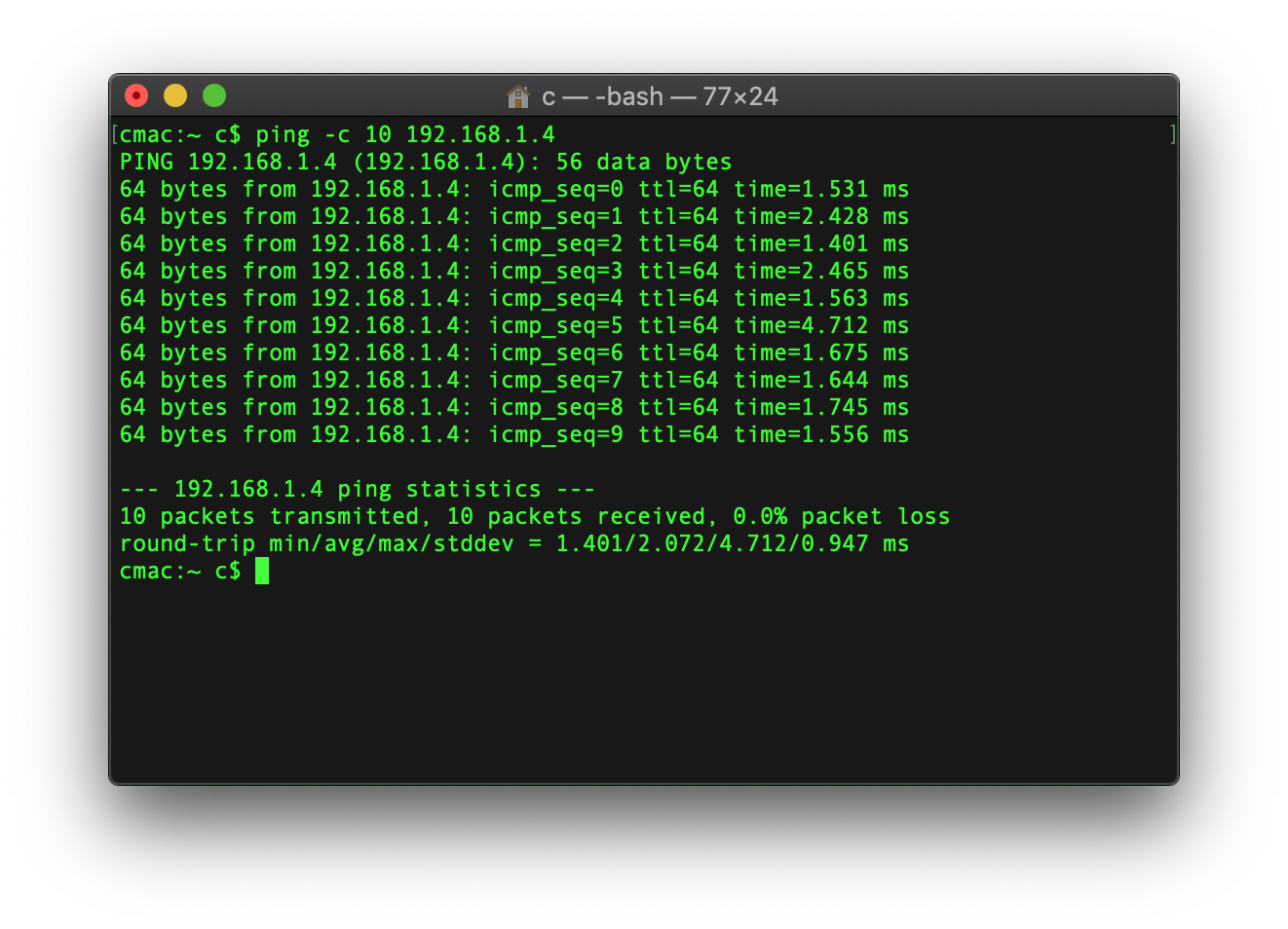 Ping from my laptop (connected via WiFi) to folding PC (via wireless bridge).

A better connection allowed me to use this computer for more than just folding:

One thing that hasn’t changed is the need to manually boot the computer after a power cut or when something crashes and it stops responding. It doesn’t happen often, but it’s annoying. 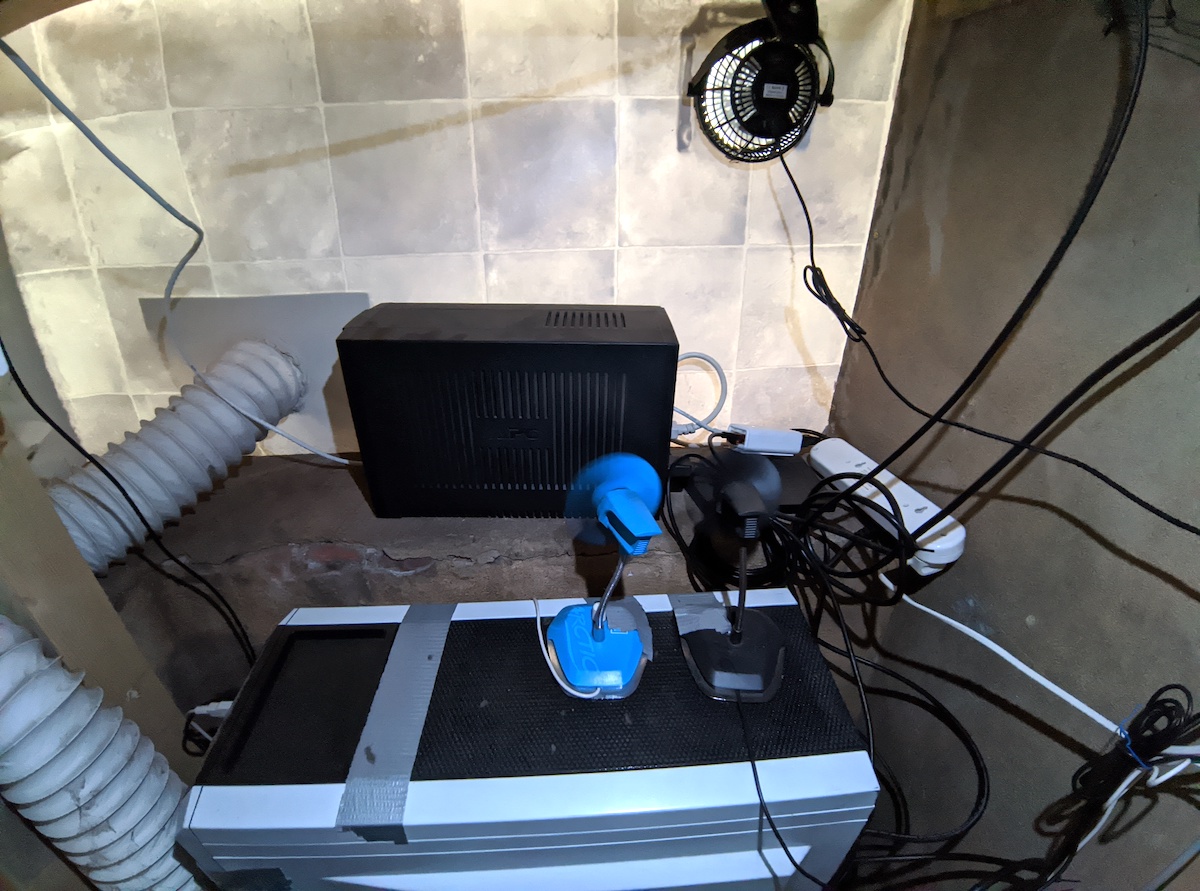 Should you do it too?

I think it depends a lot on the space where the computer will be and how extreme the weather is where you live.

What I built is not perfect, but it’s enough for my climate. It gets hotter than I wanted in summer, but it doesn’t get extremely cold in winter. We also don’t have things like hurricanes and the chance of a having a flood where I live is very low. My solution wouldn’t work in a very cold or very hot country.

If you decide to do it, make sure things like rain/wind won’t be a problem, be careful with all electrical stuff, and keep in mind that hardware may not last a long time. The chance of the computer being stolen is probably higher than if it was inside your home, so I suggest you encrypt your disks and don’t tell everyone about it.

Unrelated to the whole “running a computer outdoors” subject, but it might be useful for someone. This is some of the software I use on this machine:

I also have Handbrake (video encoding), Virtual Box (virtual machines), OpenHardwareMonitor (details about the hardware and temperatures), Deluge (torrents), and Simple DnsCrypt (encrypts DNS queries – I use it because the Archive Team VM requires a DNS server that doesn’t filter requests and my local resolver blocks ads/tracking). 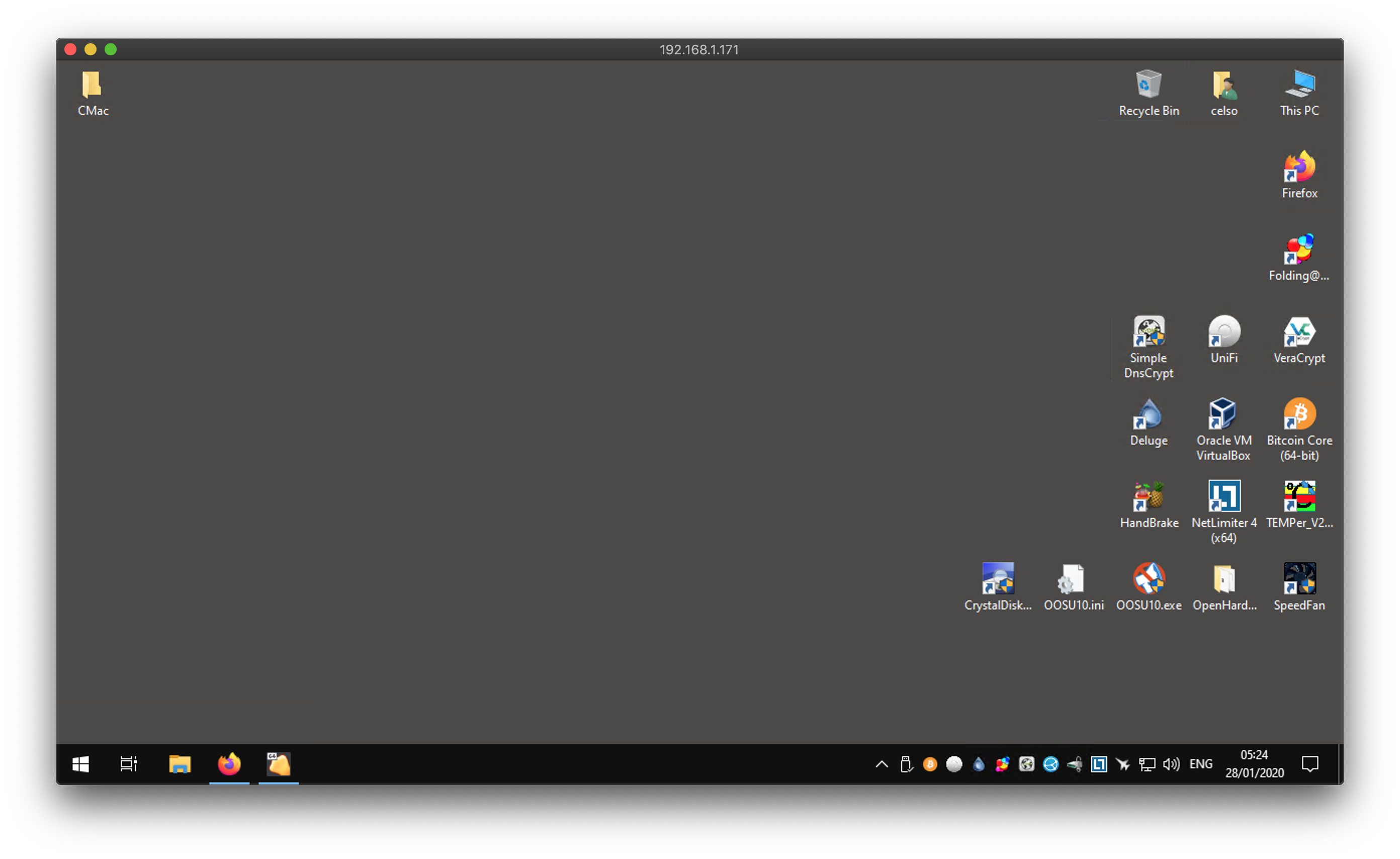 Very good sir
I always wanted to be an computer engineer, but i couldn’t afford to study
I’m learning myself
But it’s very difficult, because none of my friends know about it
You are very inspirational
Maybe i could become like you in future sir
From india

you are doing a great public services
how much does it all cost to run this setup?

Thanks. Now that I already have the hardware, the only regular cost is electricity (50-60 GBP/month) which is not that cheap in the UK.